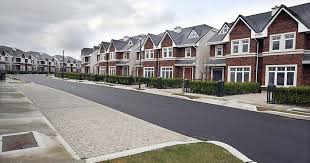 Another week, another report… The latest property price research from Daft.ie shows that house prices, unsurprisingly, declined in June. This average price decrease comes despite an increase in residential market activity since estate agencies nationwide reopened last month. This latest decline represents a year on year decrease of 3.3 percent – the decline was slightly greater in Dublin. The average home sale price across the country is now €253,868 (€369,000 in the capital). While the number of homes on the market right now is lower than last year, more than 5,200 properties were listed for sale in June. This is a huge jump up from the 2,000 listed in both April and May when no in-person viewings could take place.

Despite trend indications to the contrary since the start of the pandemic, average rents actually increased, albeit just by 0.2 percent, year on year. Once again, the increase was slightly higher in Dublin. The average monthly rent paid in Ireland is now €1,402 (€2,023 in the capital) and Ronan Lyons confirmed that there are now “significantly more homes listed for rent” compared with last year (up 38 percent), however, he was at pains to point out that this does not mean any of Ireland’s underlying housing problems have been resolved. Interestingly, he also noted that while the new Government is talking a big game on facilitating new owner-occupied homes, the reality is that “the fundamental shortages are in the social and market rental segments and it is those segments that must be the focus for policymakers over the coming years”.

Ronan Lyons reiterated that Ireland still needs hundreds of thousands of new homes, primarily for one and two-person households. These specific housing needs were not addressed by the new Housing Minister Darragh O’Brien this week as he continued to talk about delivering more affordable homes and first-time buyer supports. The Irish Times summed up the new Minister for Housing’s plan to tackle the crisis as “More of everything”.

And this ‘more of everything’ applies to property developers too as the Minister is pushing to double the percentage of social and affordable housing a developer will have to set aside in new schemes, from 10 to 20 percent. Obviously, this takes us back to the pre-2008 Part V regime. This proposal is light on detail so it is unclear whether this change will revert to the pre-2008 practice of making a payment in place of delivering the homes. The likelihood and timeline of any such change will be critical to watch for over the coming weeks. In the meantime, you can contact any of the Lotus team to discuss the likely impacts of these proposed changes on new development projects.

← A Week is a Long Time in Politics